Hacker News vs. Facebook - A Look At How Their Traffic Differs

I recently hit the Hacker News homepage for a post which discussed my favorite startups from Start-up Chile, it was on the homepage for a couple of hours.  I’ll break down how useful this traffic was below because to my surprise, while the post generated over 3700 visitors, only 10% of them viewed more than 1 page.

The spike from Hacker News sent in about 3700 visitors with the following breakdown:

This is the traffic to naysawn.com by hour: 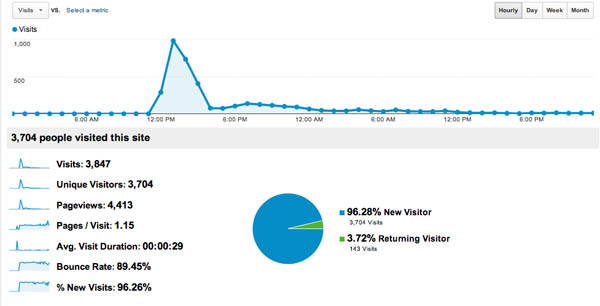 BUT Only 10% of Visitors Viewed More Than 1 Page

While the post generated a lot of traffic, 90% of the visitors bounced.

Here is the engagement breakdown from Google Analytics:

Edit: After publishing this article, Fred correctly pointed out that Google Analytics reports users spent 0 seconds on the page if they leave within a single page view.  Therefore this graph above is deceptive.  All that it shows is that 90% of users left the site within viewing a single page.

While Hacker News and Reddit sent the most traffic in terms of the percentage of the total traffic they sent, each was also more likely to have users only view a single page on the siter. I suspect this may be because people generally are opening less links when browsing Facebook and Twitter than when they are browsing Reddit or Hacker News. 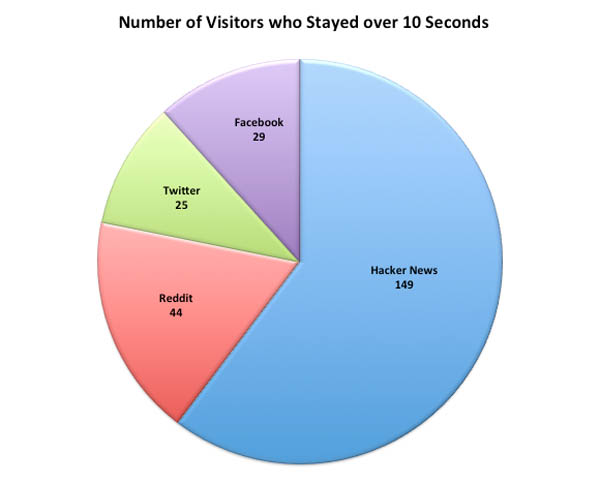 Useful but Not Incredible

Although only 6.7% of Reddit users and 8.6% of Hacker News read more than one page, they were still a great bunch. Many found the content compelling enough to sign up on the various start-ups, which were mentioned in the post, tweet it out or sign up on Art Sumo. This all came from just 300 visitors out of more than 3000 who first landed on the site.

Do these percentages match your own experience?  Please leave a comment or join the discussion below on hacker news.